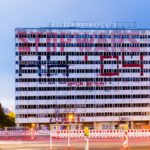 The facade of the Haus der Statistik complex near Alexanderplatz exists in aesthetic flux. Intrepid people often enter the permeable, decade-abandoned structures, sometimes leaving behind impressively scaled and rapidly vanishing messages. Some, like the now iconic “STOP WARS” have a seemingly indelible place in the mutable tempo of Berlin. Now, a new message crowns the facade with intentions to stay for the foreseeable future. ALLESANDERSPLATZ, a play on words  involving “alles anders” (german meaning everything different) and the nearby transit hub, appeared last month to signify progress on an ongoing collective redevelopment project I recently covered.

With this idea of “alles anders” now looming over the space, I still have to wonder whether this undertaking will in fact, deliver something radically different than the current norm in Berlin of gentrification-driven inaccessibility. The newest press release from Initiative Haus der Statistik, has given me hopeful pause. On the 7th of June, the cooperative group steering the project, signed a continuation of collaboration and financing for the ongoing process. This group calls itself the Koop5 and consists of the Senatsverwaltung für Stadtentwicklung und Wohnen (city office for urban development and housing), Bezirksamt Berlin-Mitte (Berlin-Mitte city hall),  WBM Wohnungsbaugesellschaft Berlin-Mitte mbH (affordable housing services for Berlin-Mitte),  BIM Berliner Immobilienmanagement GmbH (contractors for restoration and new construction), and  ZUsammenKUNFT Berlin eG (collaborative working group of artists, activists, civic organizations).

Continued collaboration between the city government, affordable housing providers, and ZUsammenKUNFT who represent the initiators of the entire project suggests that the needs of the surrounding community will be taken into account in further planning. The current plans, which are available on the website, serve to counter displacement of artists and lower income renters who experience pressing consequences of gentrification. Initial demands for affordable studio spaces and apartments are now integrated into a mixture of adaptive reuse and new construction.

The press release also announced progress on construction and the opening of an exhibition. This exhibition presents the project’s story from its beginning as a one-off protest in 2015 to the present full-fledged movement. According to the initiative, it “explains how the development of the empty building complex was oriented towards the common good. The exhibition focuses on the diverse formats of participation and the numerous impulses that found their way into the integrated workshop process from September 2018 to February 2019.” With that in mind, this exhibition also focuses on the project’s rapidly crystallizing future. I will certainly visit this exhibition and you should too if you are based in Berlin or visiting.